How accurate are my results?

Unfortunately, it’s impossible to provide a 100% correct evaluation of your ancestry without having DNA samples from every ancestor going back 200,000 years.

However, we are able to provide a research-grade estimation of your BioGeographical Ancestry. Our approach to genealogical testing is much like predicting the weather: it’s not possible to be 100% correct all the time, but we can at least be mostly correct most of the time by observing patterns, knowing history, and using statistics.

Our approach combines genealogical and anthropological history to provide you with the most statistically likely estimation of your BioGeographical Ancestry.

What is “BioGeographical Ancestry?”

Your “BioGeographical Ancestry” is a description of your place in the evolutionary and geographical history of our species. It’s simply a breakdown of where your genes come from, according to the results of your DNA tests. Some might define it as “race” or “ethnicity,” but we don’t feel that these terms adequately communicate the complexity of the science and history behind the information that we give you.

What if I don’t think the BioGeographical Ancestry in my report is accurate?

This is a question we get when someone believes that a certain piece of their family history might be missing, such as an instance where someone knows that they had a great great grandfather who was indigenous American, but show 0% indigenous American ancestry on their report.

Keep in mind that the percentages in your report are an estimation based on a combination of genetics, anthropology, and social science. This estimation is based on what is most statistically likely for your genetic makeup and there is room for error. Think of the confidence levels as a representation for how much room there is for error.

So, in the example above, your report might show 0% indigenous American ancestry, despite knowing that you have a great great grandfather who was indigenous American. This would happen if this known ancestor contributes very little to your overall genetic makeup. This is common – not all genes are passed down from every individual, and they are not passed down equally, which we’ll elaborate more on in the next question.

Why are my sibling’s results different than mine?

As stated in the previous question, not all genes are passed down from every individual, and they are not passed down equally.

Let’s say hypothetically that your father’s BioGeographical Ancestry is 50% European and 50% African, while your mother’s is 50% Asian and 50% Indigenous American. Such precise breakdowns of ancestry are extraordinarily rare, but let’s go with it for the sake of this example.

With your parents having a BioGeographical breakdown like that, you might expect yourself to be 25% European, 25% African, 25% Asian, and 25% Indigenous American. However, genes are not passed down in an exact fashion like that. Your parents combine for a total of 92 chromosomes (46 each) and you only get 46 of those yourself, 23 from each parent. Of the 23 chromosomes from your father, it’s entirely possible for you to receive 17 chromosomes from his European side, while only 6 are from the African side. This is an extreme example to demonstrate a point–lopsided inheritance like this is as unlikely as a perfectly even split. You would have a similarly uneven breakdown from your mother’s side. Your sibling might get a completely different breakdown than you as well, which would cause you to have slightly different results.

I have a very small percentage (5% or less) of a certain Ancestry. What does this mean?

There’s a different answer to this question for each individual. The most likely scenario is that there is a piece of your family history that you have yet to discover. However, it’s also possible that you share a common marker from that population by random chance, but this is less likely. The smaller the percentage, the farther back in your family history your answer lies.

Can a CRI Genetics test confirm my race?

The simple answer to this is no. Our tests will identify your most statistically likely BioGeographical Ancestry, but the results are not intended to provide legal proof that you belong to a specific race. Many of the reasons why are detailed in the answers to previous questions. Race is a complex thing to define when ancestral genes are not passed down in a consistent, predictable manner.

Many users are attempting to verify Indigenous American ancestry. If that’s the case for you, check with the rules of the specific tribe you think you might belong to, as each tribal government has its own set of laws as to how to identify indigenous citizenship. For example, many tribes will recognize your citizenship ONLY if your indigenous heritage is through your mother. In this example, even if your father is 100% Indigenous American, you won’t qualify for tribal citizenship. Again, laws vary from tribe to tribe, so go by their guidelines if you’re trying to verify Indigenous American ancestry. Also keep in mind that the complex anthropological history of human migration can allow for someone of European descent, whose family has been in Europe for centuries and only intermingled with other Europeans, to have some ancestry from the other haplogroups around the globe. Such a person could have up to 10% Indigenous American BioGeographical Ancestry, despite having a family history of never setting foot in the Americas.

How did you determine my BioGeographical Ancestry?

At CRI Genetics, we determine your BioGeographical Ancestry by examining individual pieces of your DNA. We compare each of these pieces against DNA from populations around the world and look for matches at specific locations. When we find matches, we then compare what we know about the makeup of your DNA against what we know about Anthropology and the history of Human migration. The results of this deep analysis are added up across your genome to calculate your BioGrographical Ancestry.

If you have any additional questions that cannot be answered here, or if you prefer to place your order over the phone rather than online, feel free to give us a call at: 1-800-571-9216.

Where can I find my kit number?

Look on the back of your CRI Genetics box. At the very bottom of the DNA instructions, you will see a barcode. Your kit number is the number attached to that barcode. 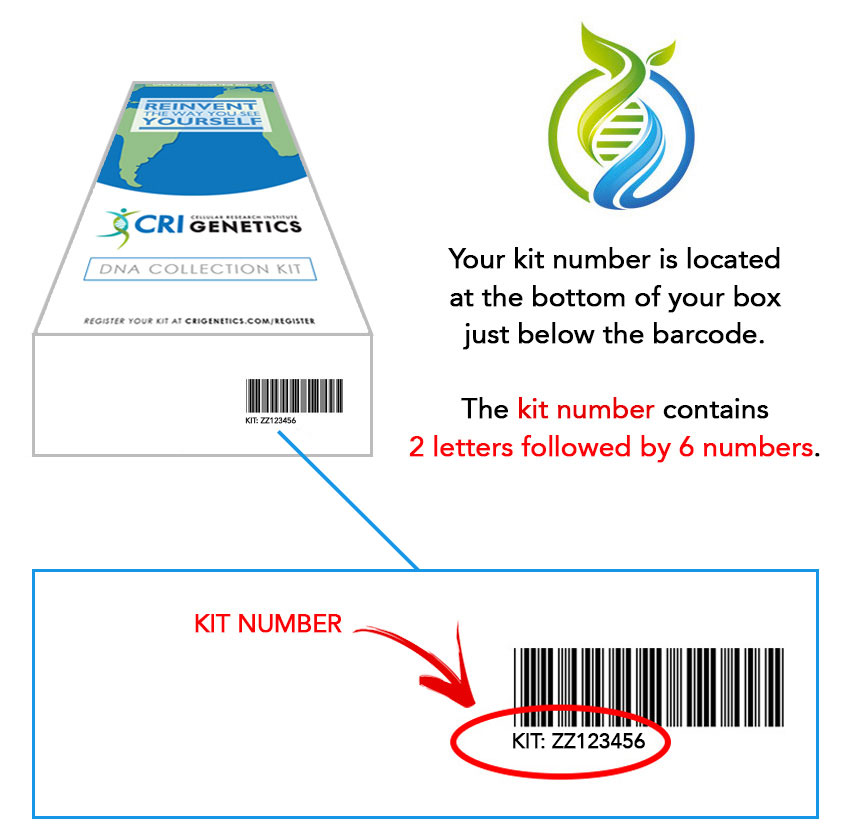